We have just completed another sound system installation this time for Trinity 6th Form Academy in Halifax within their new drama department which has just been built.

We were contracted to provide a new sound system installation solution within the newly built academy so we opted to install four Electrovoice ZX1 wall mounted 200 watt speakers in white, two in the drama room itself and two just outside the classroom so when the room is fully open they can cover the whole room.

We provided them with a 16U Swan portable Flight Case so that they can have the option of two control positions, one being in the classroom itself and another in the extended area so they can control the sound from either position by plugging into the speakon sockets we have installed.

Mounted on the top of the flightcase we have installed an Allen & Heath QU16 – 16 channel digital mixer to control all the microphones and Denon Media player and this will give them the facility to program different scenes for their drama productions.

Also within the flight case we have installed a Denon DN300Z media player which gives them the facility of CD, USB, SD Card and Bluetooth playback for the drama classes.

Another part of the sound system installation project was to supply the drama department with twelve Showtec Q18 high brightness LED par cans on tripod stands along with a Zero 88 24 channel DMX lighting desk and Chauvet Wireless DMX sender and receivers which will be used for productions. 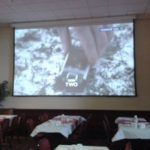